Before the depression struck in 1929, Lowndes County tobacco farmers could grow a crop of tobacco, then smoke commercial cigarettes made from the tobacco leaves at a factory located in Hahira. In 1926 a group of Hahira and Lowndes County business men sold stock and built a commercial cigarette manufacturing plant in Hahira.  The investors plan was to use south Georgia tobacco sold at local warehouses to make cigarettes, thus saving on shipping.


Foundation being laid late 1920's.
View of west side during construction.
The main entrance during construction.
When the factory first opened it manufactured "Oteen" cigarettes.  The cigarette package had a picture of an Indian on the front and a wigwam on the back.  The packages were green colored and sold for about five cents per pack.  Oteen is said to be a Cherokee Indian word thus the reason for the picture of an Indian.  The factory manufactured "Oteen's" for a couple of years before closing when the depression hit in 1929.  The factory stayed idle until about 1935 when it was purchased by the Julep Cigarette Company of Boston Massachusetts.  The factory was called the Julep Cigarette Tobacco Company of Hahira and manufactured , "Julep" cigarettes which were sold nation wide. 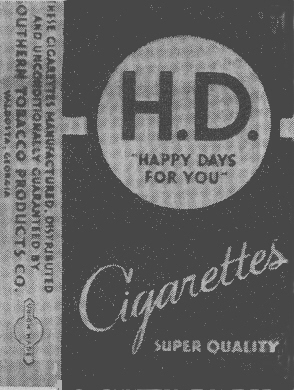 Also "H.D" (Happy Days) cigarettes were manufactured for the Southern Tobacco Products Company of Valdosta.  The cigarette package was red and white and the front pictured a round circle with the letters H.D which stood for "Happy Days For You."  the label read "Unconditionally guaranteed and of super quality."  After a few years the factory closed and all cigarette making equipment was removed.
Group in front of main entrance about 1930.
The three men on the right are identified as Garland Vickers, Rayford Folsom and William (Will) Mixon smoking cigarette.  Will was the night watchman at the plant until he joined the Hahira Police Department in 1931.

The building was then bought by Garnet Puett the founder of the Queen Bee production business in Hahira who turned it into a honeybee producing and packaging facility  He produced, packaged and shipped Queen Bees all over the world.  During this time Hahira became known as the "Queen Bee Capital Of The World" and "Home Of The Honey Bee".  A name still retained today.

In the Early 1960's the building was bought by Marty Dykes who manufactured electrical and electronic components there.  Among the items manufactured were solid state heating circuit boards used by the United States Space program and electrical strip heaters for heating subway cars.
About 1980 H.M Barfield purchased the building and rented it to Kurt Schmit who began a automotive starter and generator re-manufacturing facility.  Mr. Schmitt later bought the building. The business relocated to North Carolina in 1996 and the building was rented by a small fiberglass boat manufacturer who began to manufacture two man fishing boats.  The business was unsuccessful and closed shortly.  In May 1996, the building was bought by the Taylor family who planned to renovate it; however, never came to fruition and the structure was later demolished in 2002.  Since then the property has been redeveloped, which is adjacent to the railroad tracks on W Coleman Drive near Tillman Street.

The above information was provided to by H.M. Barfield a former owner of the building.  Also newspaper articles from The Hahira Gold Leaf dated September 28, 1961 and The Valdosta Daily Times dated June 3, 1972.
From an e-mail dated November 21, 1999 from Lake Puett:
I meant to reply weeks ago about the old cigarette factory. I remember it well. Is it still there? My father's company, the Puett Company, used it for many years, even after Daddy built the little cinderblock building next door when I was eight or nine. I remember going to Daddy's office in the big red building when I was three or four. It's interesting to stand near the building at night when a train goes by. The train headlights make strange patterns through the windows of the building. At least, it used to look like that...